A photo documentary of contemporary Cuba in 28 photos from my last trip to Cuba in 2014. Cuba left me a bitter-sweet feeling of a country with great people and potential in the process of redefining itself after 55 years of socialism. Cuba is much more than great beaches, salsa and 60-year-old American cars. It is probably the last place on earth to study the pros and cons of the socialist experiment, a society struggling to regain economic growth, which has been hindered for five decades and at the same time, a third world country without hunger and extreme deprivation. Growing inequalities are evident but so is the potential coming from decades in education investments.

A guy dragging a pig in Trinidad's historic center. Cuba is essentially a time capsule. In most places, like Trinidad, it seems that the clock has stopped on January 1st 1959, the day Fidel Castro and his troops entered Havana. 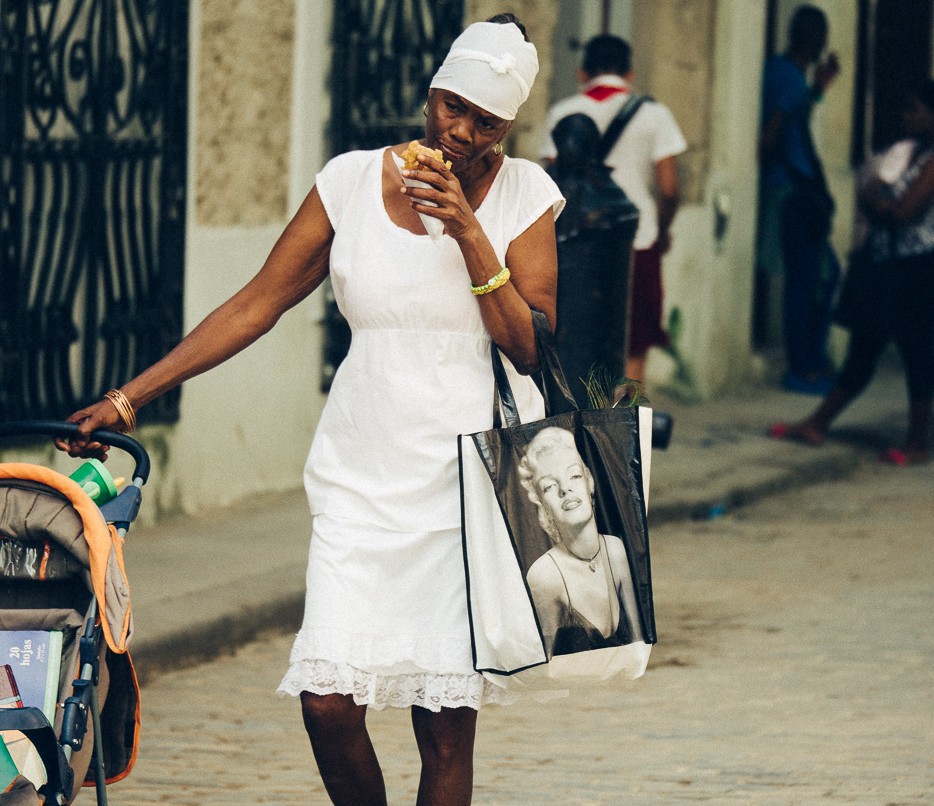 A woman on a shopping tour in the streets of Havana Vieja. Despite the tight governmental control, the time capsule is fractured by the growing tourist wave. People with access to CUC (Cuban Converible currency) have the means to acquire some western goods and dress differently. A gap between the privileged and the rest is growing rapidly. 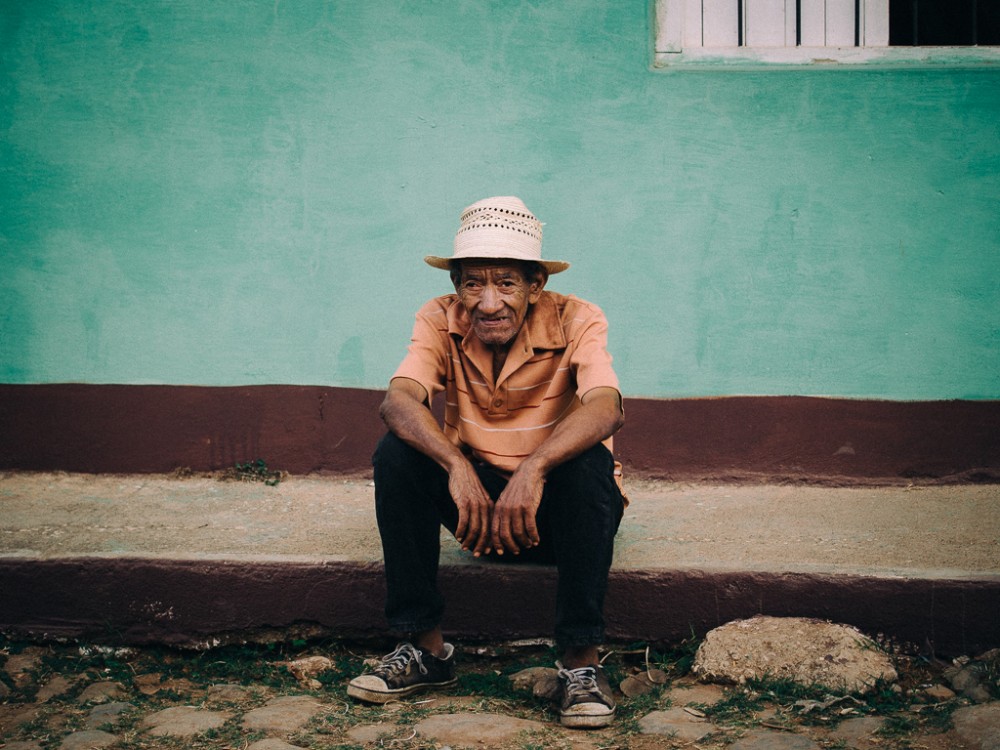 An elder Cuban, killing time outside his home in Trinidad. As in any other rapidly changing society, elders are getting more marginalized, unable to adapt to the new conditions. Most elders depend totally on government subsidies to compliment their meager pension check. On the other hand, family ties are strong, the elders are respected and the food rations satisfy the basic needs for survival. 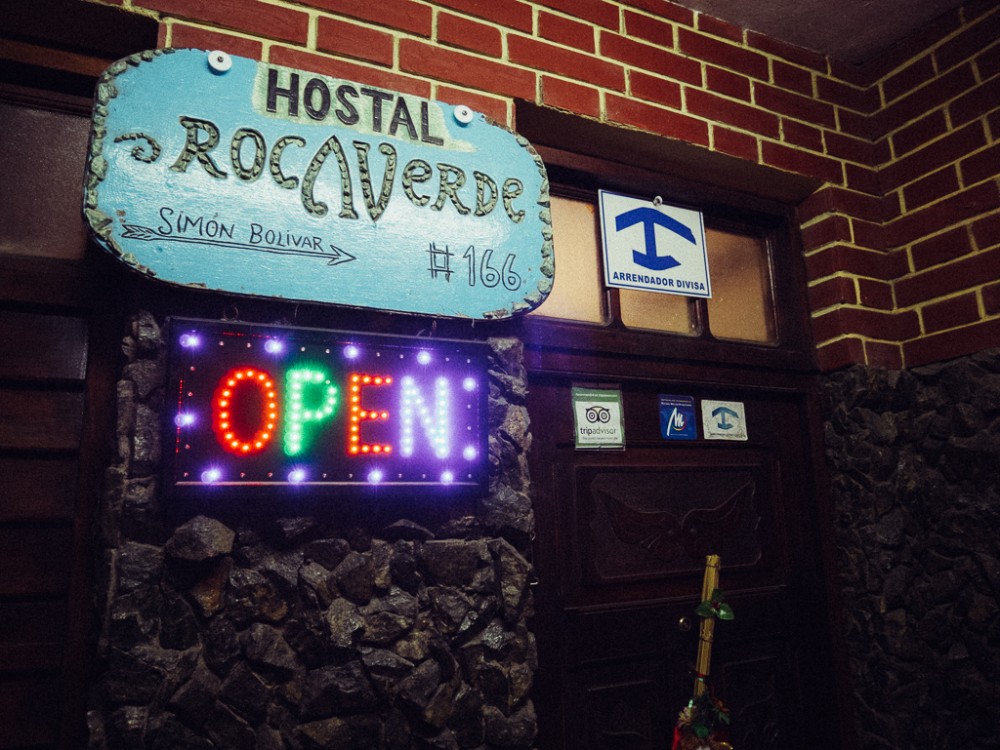 Hostal Rocaverde in Trinidad. A casa particular (private house) is the clearest example of the capitalist transformation. An honest alternative to the weak lodging infrastructure, they are clean, offer good food and at $20-30 per night, it is the best place to see the real Cuba. The owners have to pay an annual tax of 600 CUC per room in return to having the right to legally rent rooms of their houses to tourists. 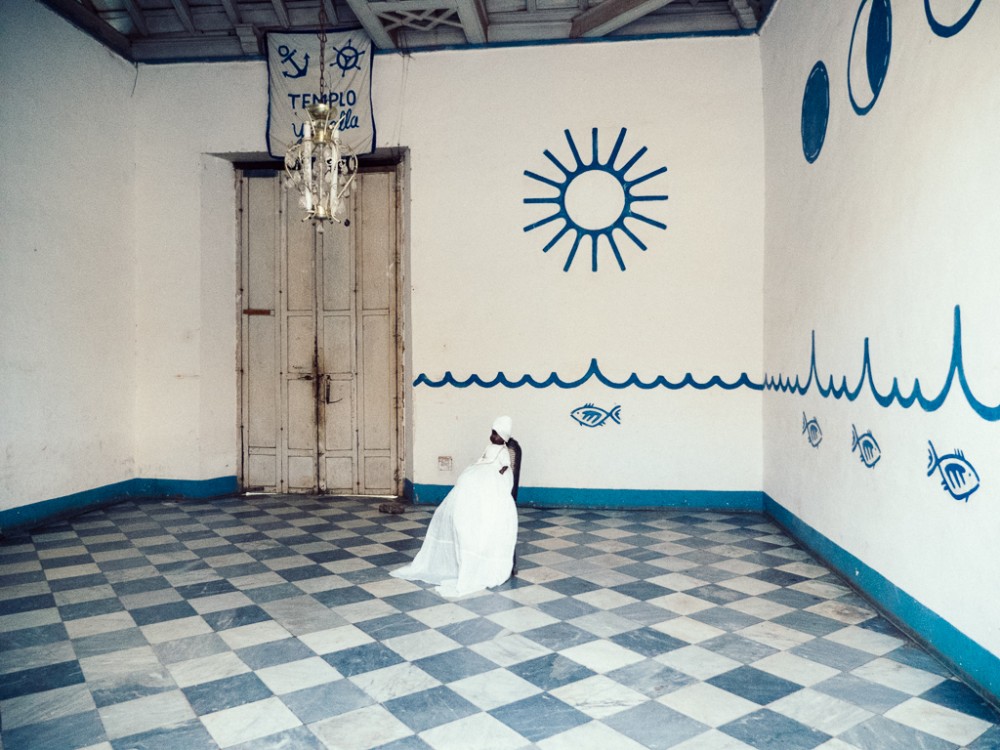 An Ilé, a house of saints in Trinidad. It is used to perform Santeria rituals and ceremonies. Santeria is a system of beliefs that originated in the Caribbean islands and merges the Yoruba mythology with Roman Catholism. 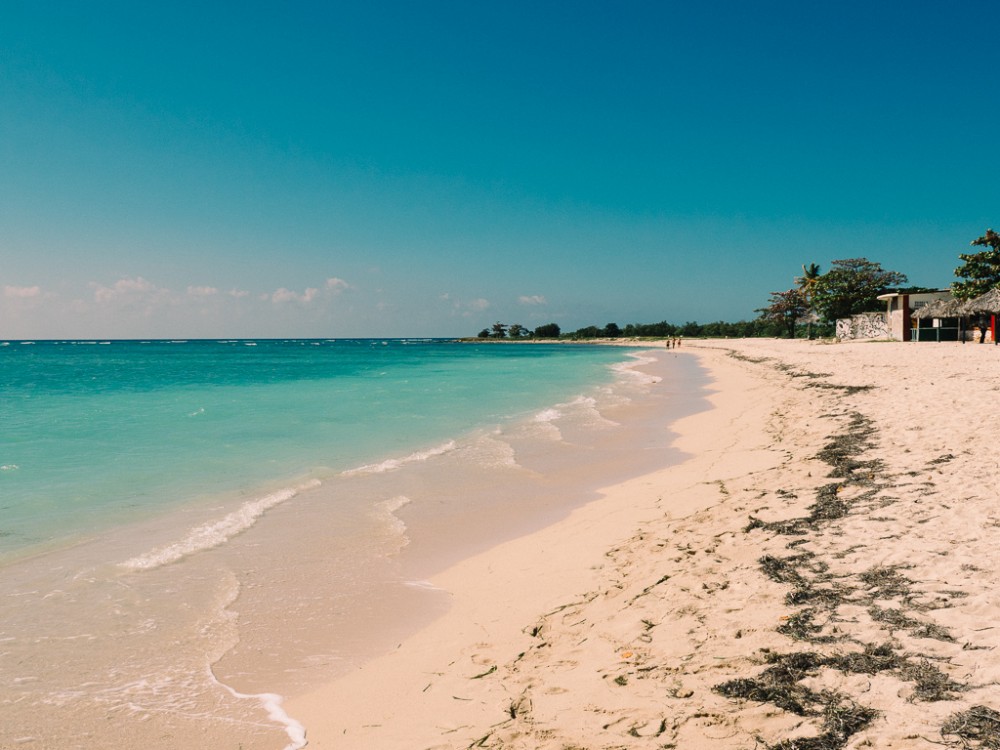 Playa Ancon, close to Trinidad, probably the best beach on the south coast. The growing tourist wave have not yet spoiled the beaches in Cuba, except from the Varadero region. The west side of Playa Ancon is usually empty, a real gem for those who like to have the beach to themselves. The east side is occupied by tourists and dominated by a soviet style resort. 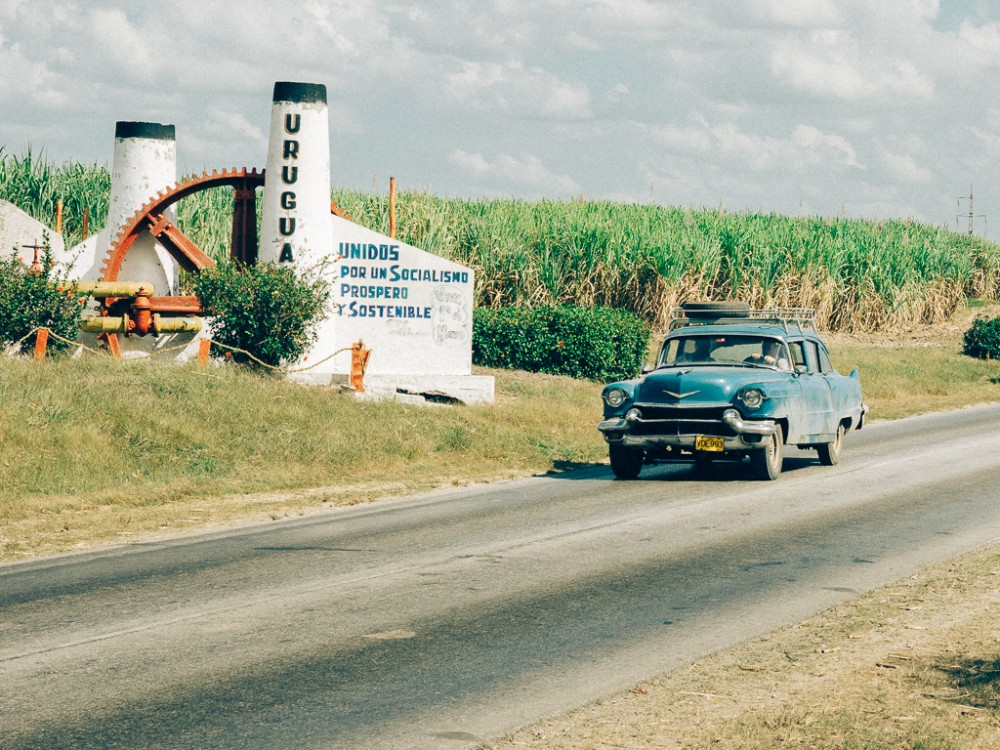 Sugar plantation on the way from Sancti Spiritus to Ciego de Avila. Although it contributes less than 10% to the GDP, agriculture employs roughly 20% of the working population and about 30% of the country's land. The main crops are sugar, tobacco, citrus, rice, potato, cassava and tropical fruits. 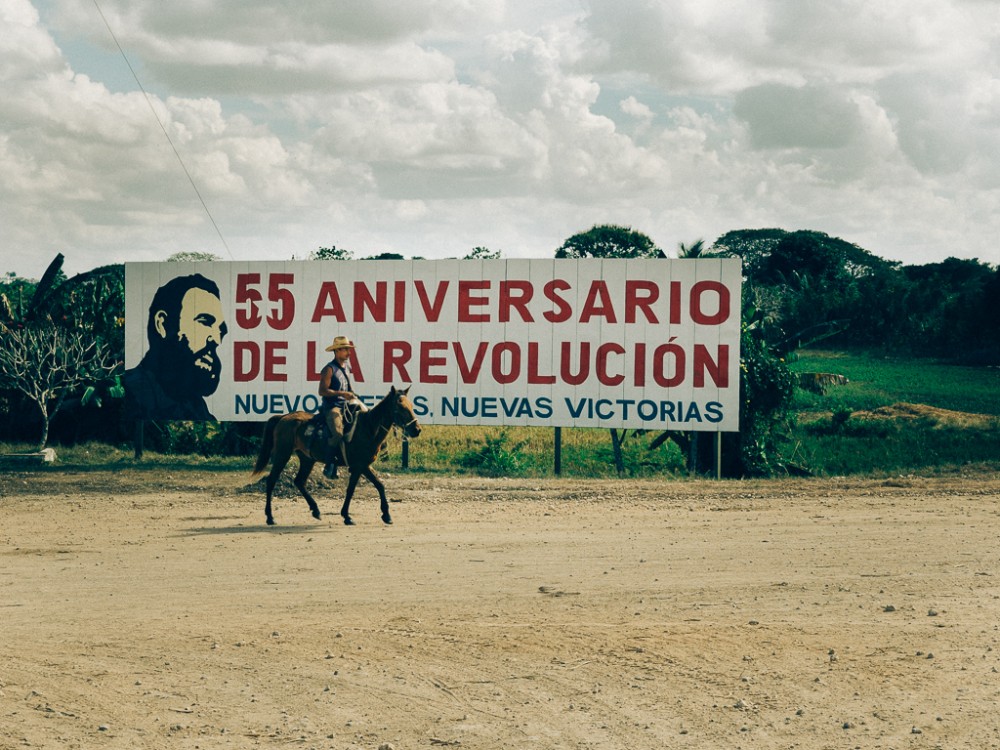 A billboard on the way to Camaguey, celebrating the 55th anniversary of the Cuban Revolution. During its first decade in power, the Castro government introduced a wide range of progressive social reforms, including equal rights to blacks and education for all children. As the US embargo continued, the regime dived deeper into socialism and the economy stagnated. 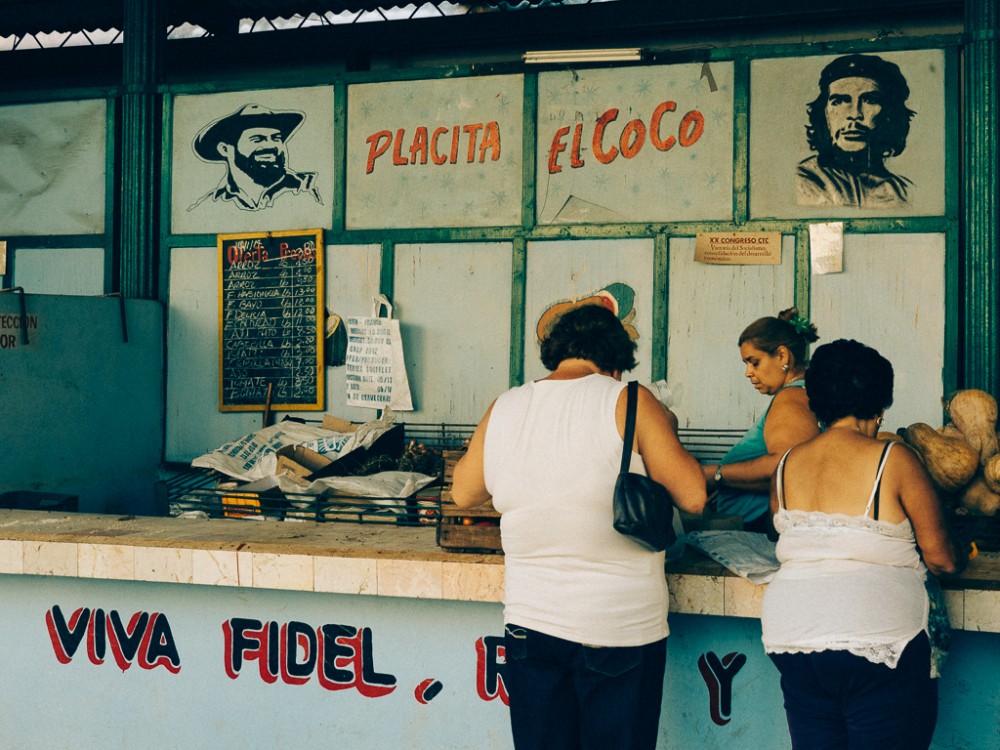 A grocery shop in Camaguey. Most of the shops in Cuba are owned by the government and characterized by their mostly empty shelves. The reason is the centralized economy and supply chain that can rarely fill the right shelves with the needed products.

A group of students in Bayamo. All students wear uniforms, a reare spectacle in western countries, but common in the rest of the world. Cuba might be a poor country, but the children are well educated and seem happy. 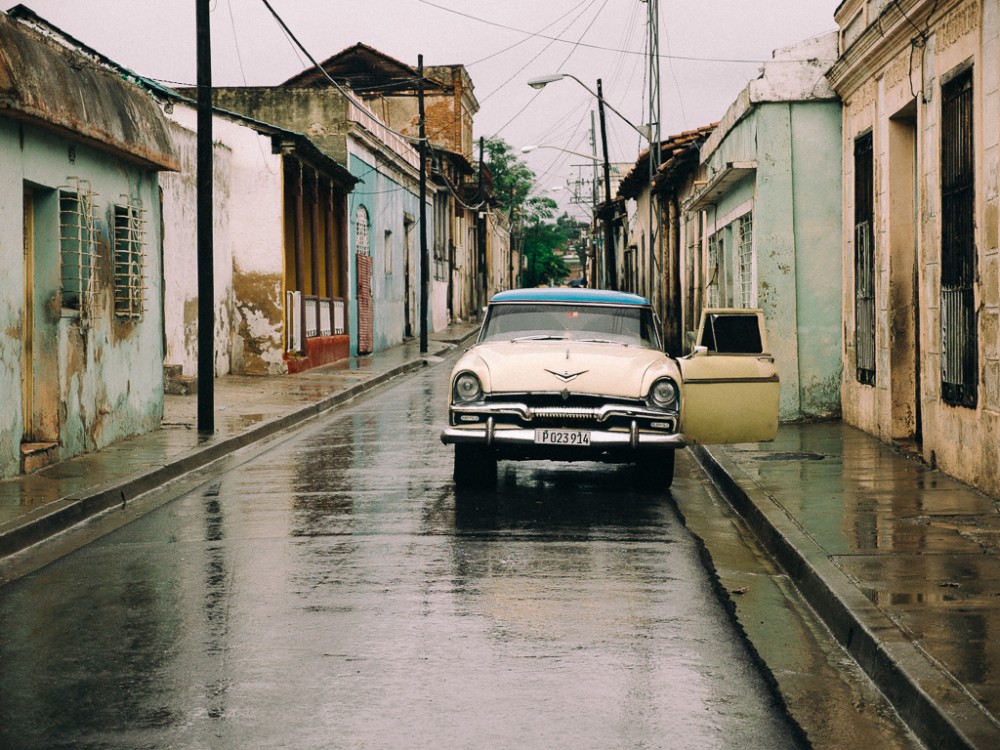 An old Plymouth parked in an alley in Santiago de Cuba's historic center. Two blocks away from the busiest spot of most major Cuban cities, you can emerge in urban solitude, an eerie feeling I have only experienced in Cuba. 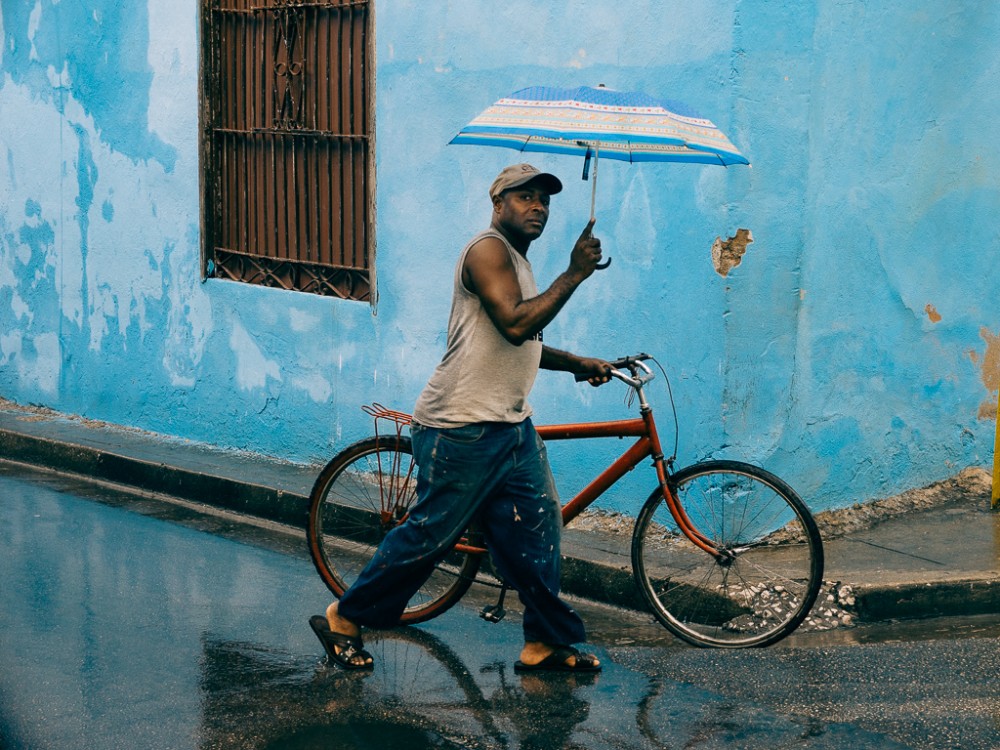 A man and his bicycle on a rainy day in Santiago de Cuba. Cuba is many things but above all is a colorful society, both metaphorically and literally. Most cities are emerged in a rich mixture of strong and fading colors. 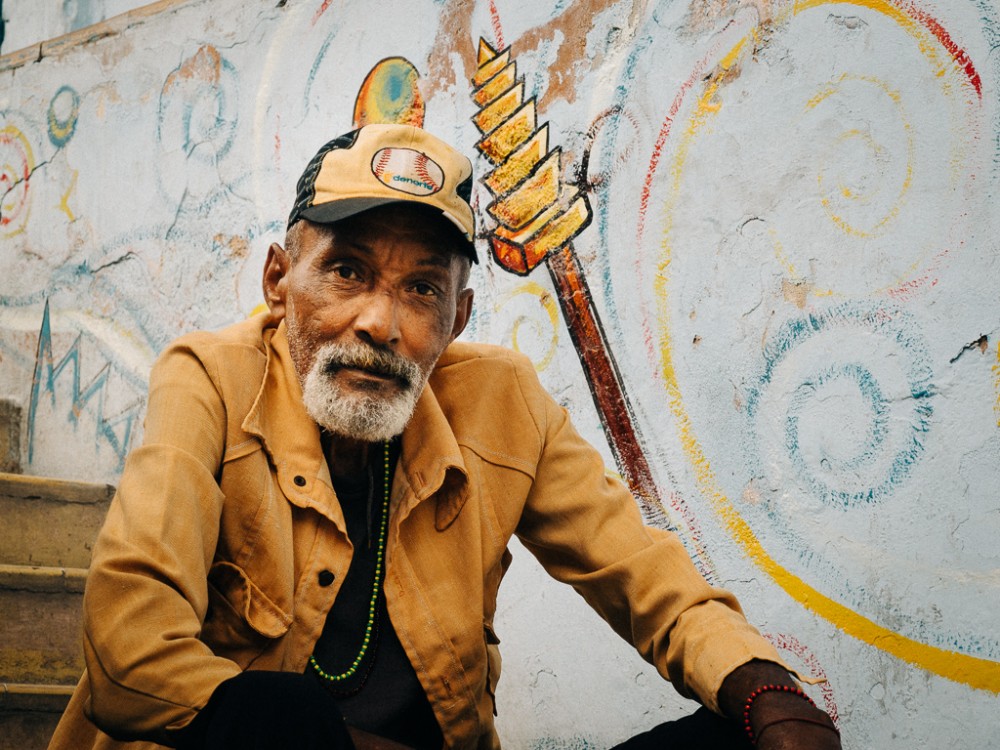 A wise guy in the streets of Santiago de Cuba. Street hustlers - hineteros - are very common in the major cities, especially in Havana, where you cannot walk one block without being asked to buy something, usually cigars, a taxi ride or women. It is annoying but not dangerous and they can be fun to talk to. 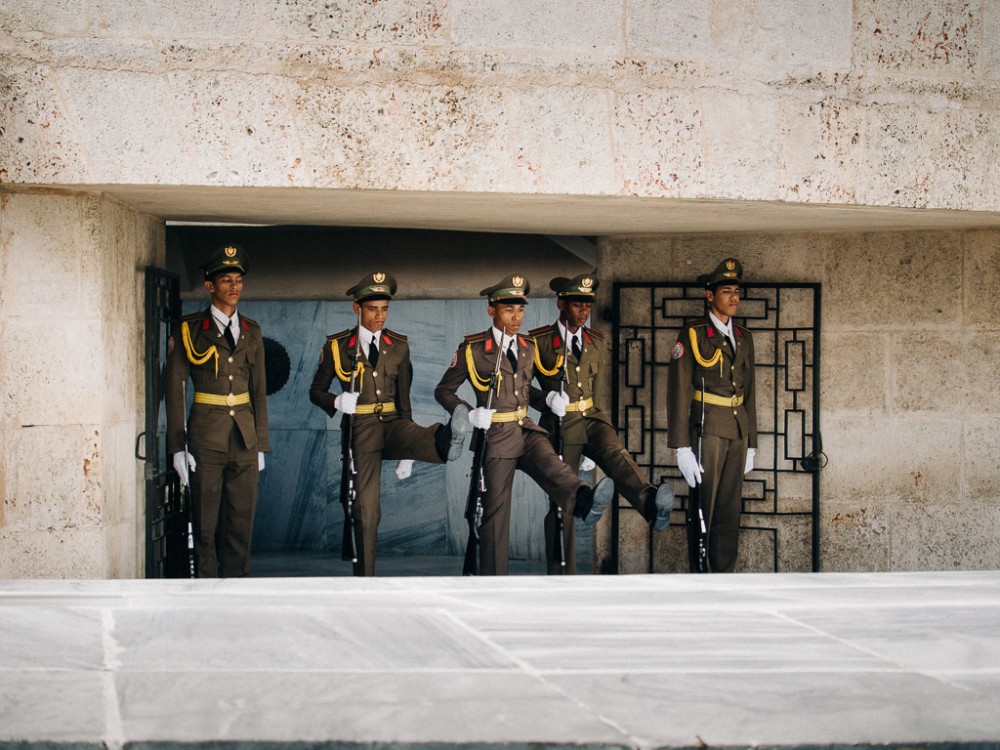 The changing of guard at the mausoleum of José Martí in Santiago de Cuba. Cuba's turbulent history provided a pantheon of heroes and its present day solitary course needs to praise them in order to keep the moral high in difficult times. 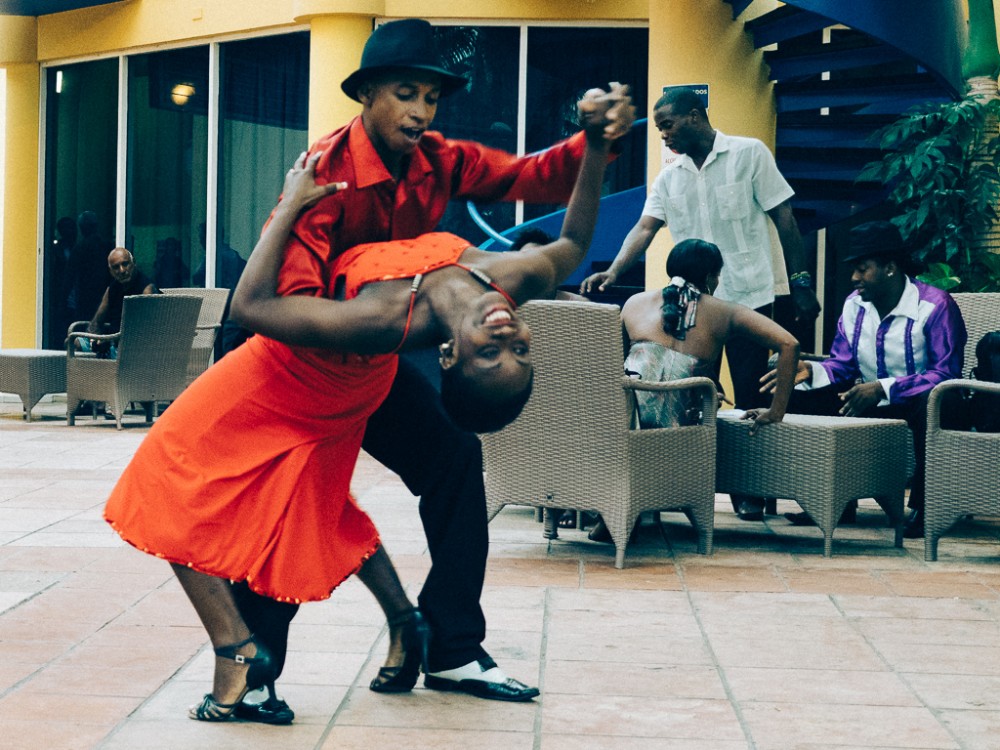 Professional dancers in Santago de Cuba, performing for guests. Salsa dancing originated in Cuba in the mid-1970s. It evolved from earlier dance forms such as Son, Son Montuno, Cha cha cha and Mambo. The local music is woven into the social fabric and can be heard everywhere at all times. 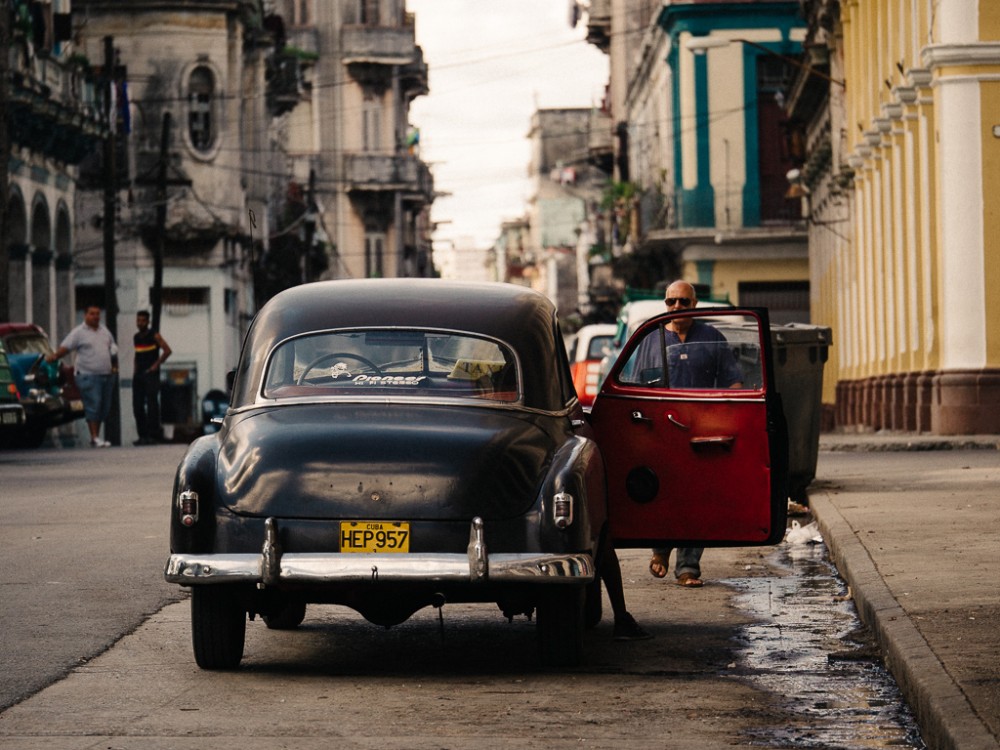 A taxi in Havana Vieja. The old town of Havana exhibits 500 years of history and is naturally a UNESCO world heritage site. It is a unique place and a true photographer's heaven. 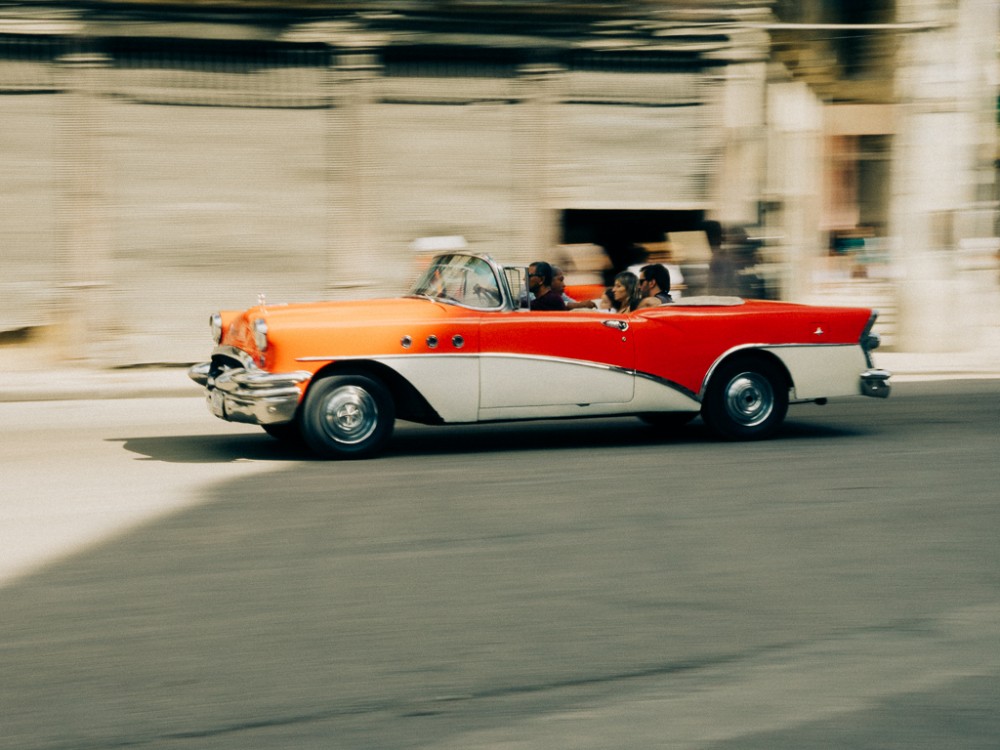 Some tourists riding a classic convertible in Havana. Tourists provide the much needed source of hard currency to move the economy forward. Despite the fears for changing the island's character and the threats to the environment, the tourist industry is one of very limited options to develop the country.

Plaza Vieja in Havana. Habaguanex, the organization responsible for the restoration of the old city runs a number of hotels and businesses and coordinates an international effort to generate hard currency income. The monay is put back to restoration (60%) and social projects (40%) to benefit the local communities. The project is very challenging given the number and architectural diversity of the buildings. The result is a marvel that makes Havana Vieja a must see. 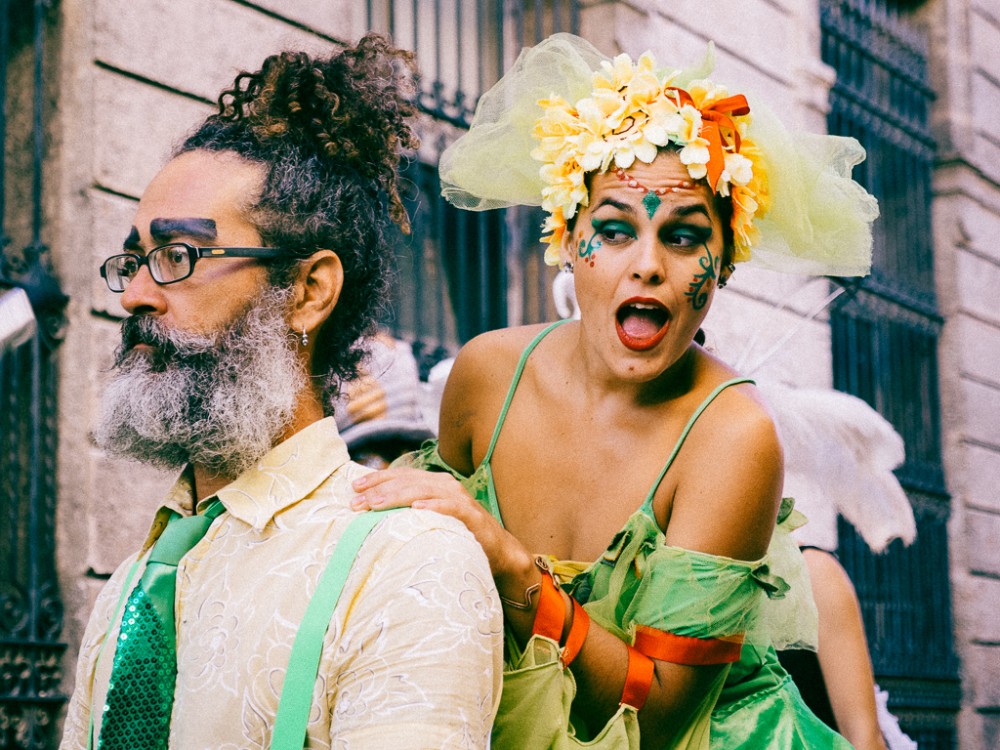 A carnival group wandering the streets of Havana Vieja. Havana is a lively as a city can get during the day, with various groups of artists performing for the extra CUC. The evenings on the other hand are unexpectedely quiet. 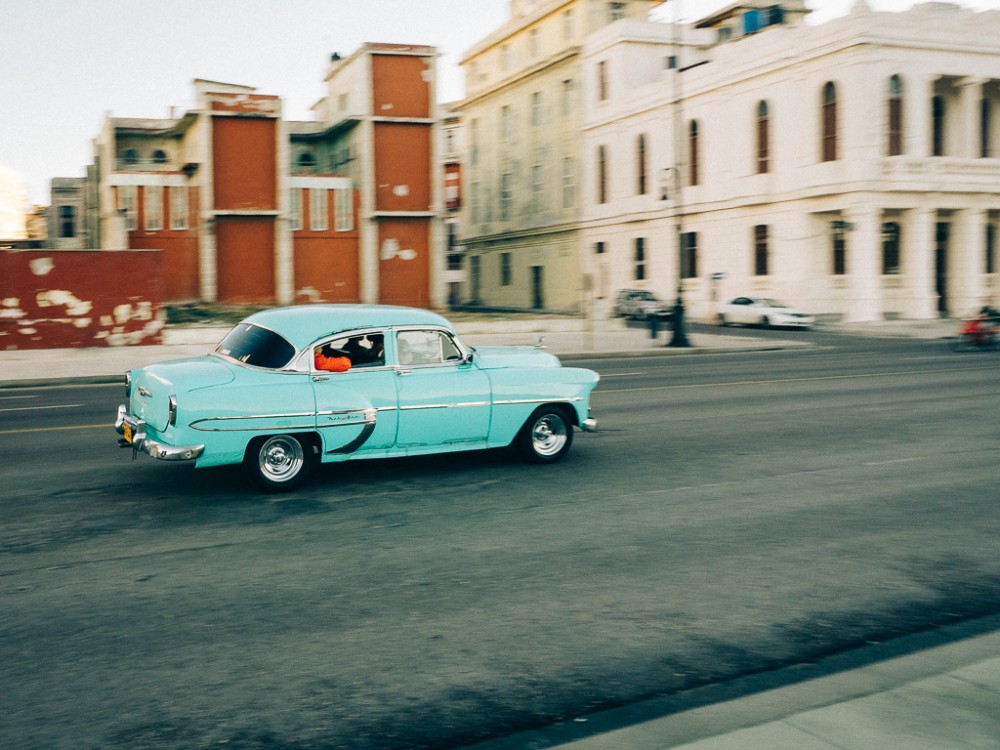 An american dinasaur rolling on Malecon of Havana. The US embargo and the inability of Cuba to modernize its car fleet, transformed Cuba into a huge museum for American cars of the 40s and 50s. I counted repeteadly and confirmed that one third of the cars in cirulation are of this era. 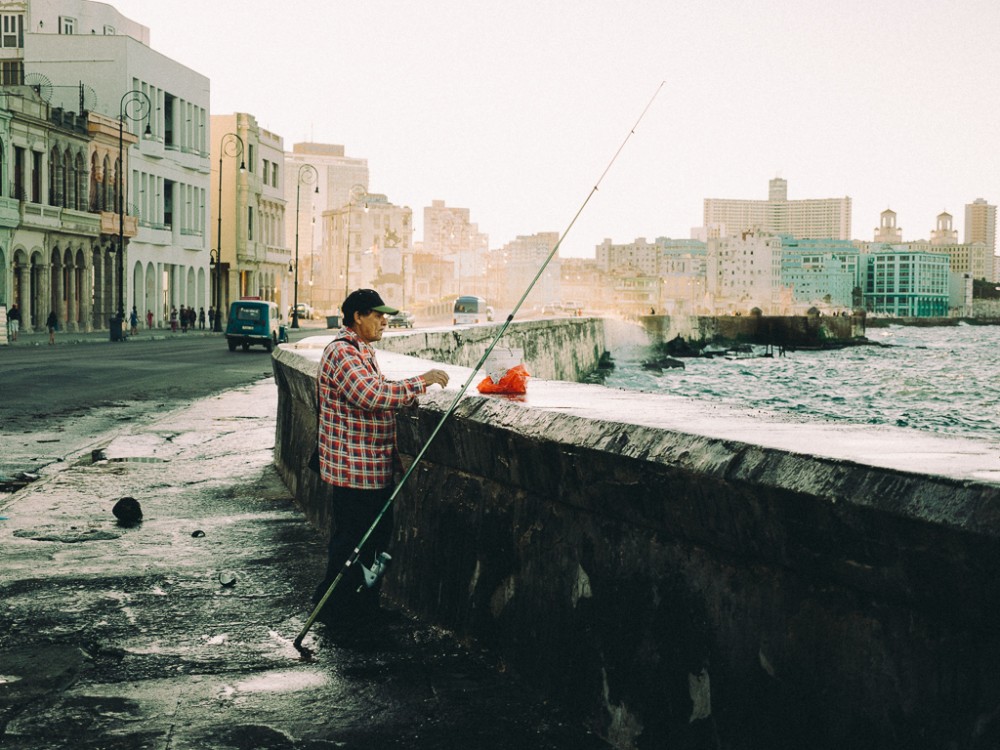 A Cuban fishing at the Malecon of Havana. The Malecon is is an 8-km long seawall and esplanade, the meeting point for the locals to take a break form the daily difficulties. Fishing, disussing, playing board games, flirting, anything goes here. Malecon is particularly impressive during a strom, with ten meter long waves washing the road and the buildings across. 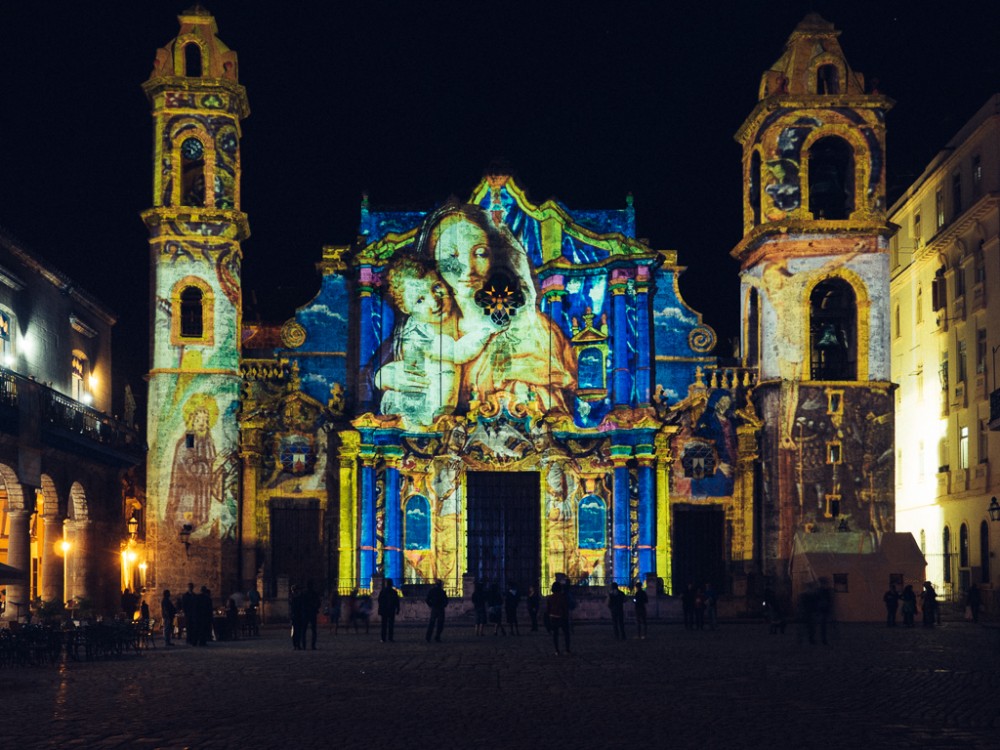 Havana's Catedral during the evening show, a projection of religious scenes surrounded by pre-classical music. The spectacle is truly unique. Despite the economic inefficiencies, the government has consistently put a lot of effort to promote arts and cultural activities. 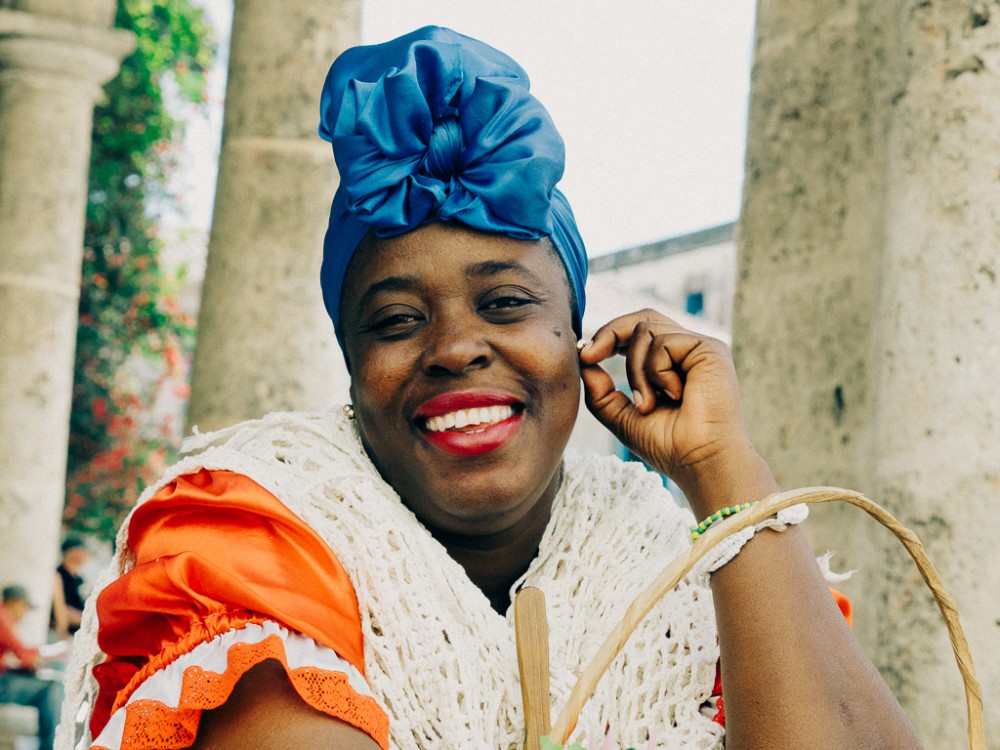 A street model in plaza de la Catedral, in Havana Vieja. Many locals earn a good living by offering to become models for passing tourists. One CUC, the usual asking price, is serious money in Cuba.

A lady model with a huge cigar in Havana Vieja. Cuban cigars are famous for a very good reason, they are simply the best. One should avoid to fall for the trap and buy cigars on the streets as the their quality is guaranteed to be bad. Bu the cigar prices on the official shops is not better than in tax-free outlets around the world. 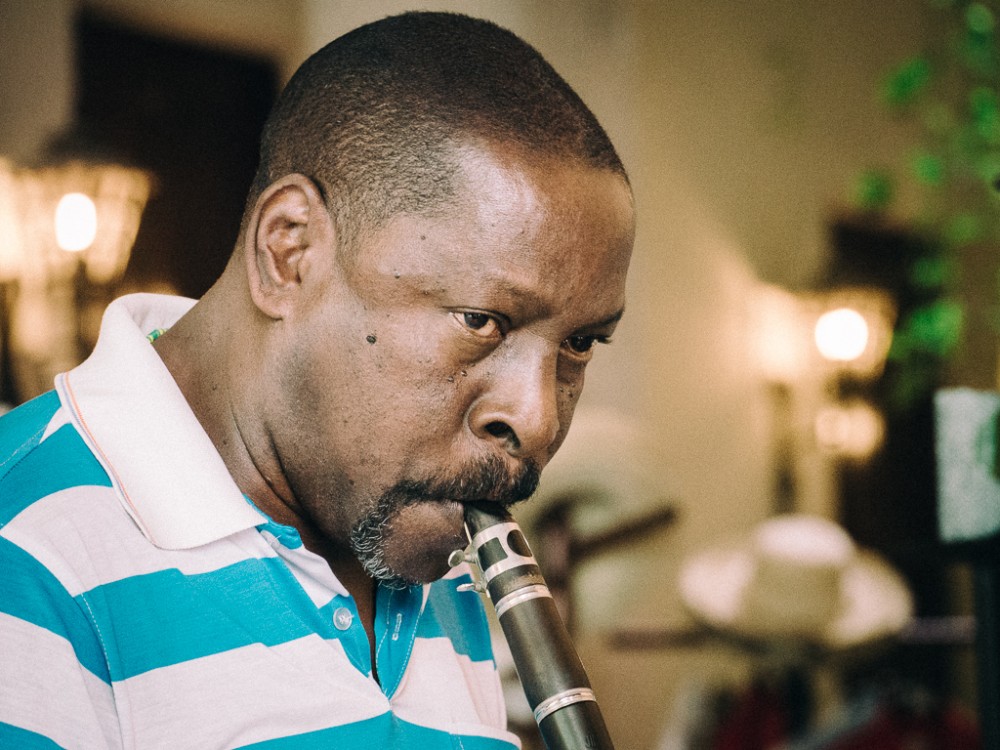 A musician playing clarinet with a small classical ensemble, in Havana. Cuba is not only salsa and classical music is more popular here than in many places in developed countries. 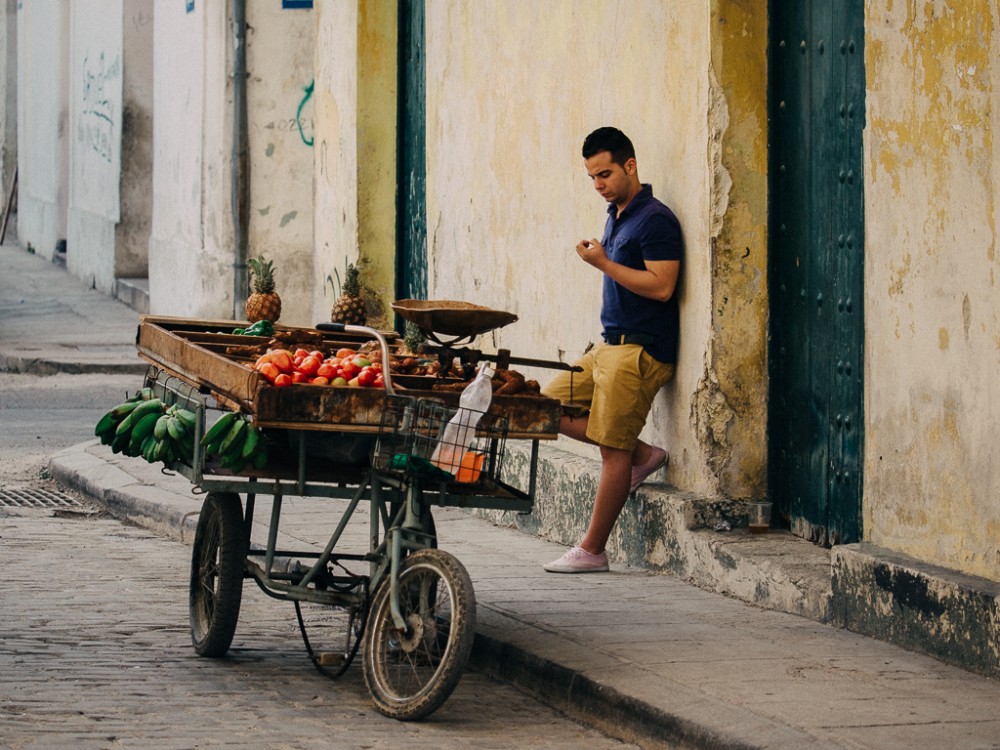 A fruit vendor in Havana. A myriad of street vendors are offering everyday goods, an answer to the inefficiency of the government owned shops. 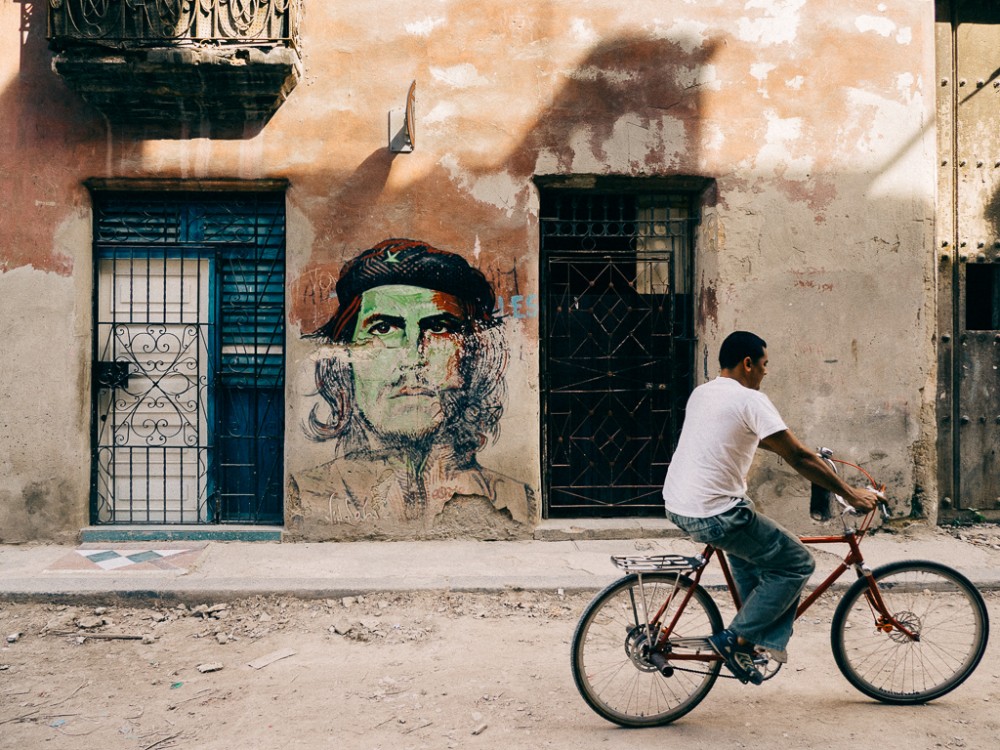 A graffiti featuring Che Guevara in a narrow street in Havana Centro. Che belons to the pantheon of the Cuban revolution heroes and has reached semi-god status. 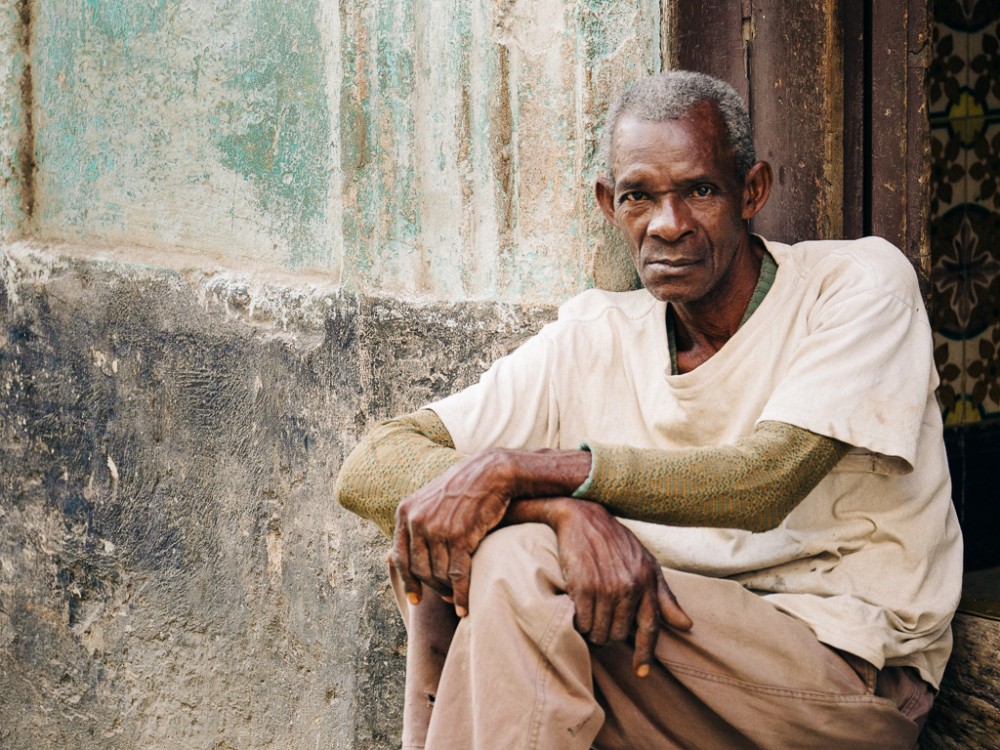 A man in Havana Vieja, sitting at the front of his home. The sad look on the face of many locals is a reminder that Cuba is undergoing many diffulties. Depite the fact that Cubans are outgoing and friendly, they are usually very reserved to initial encounter with foreigners. 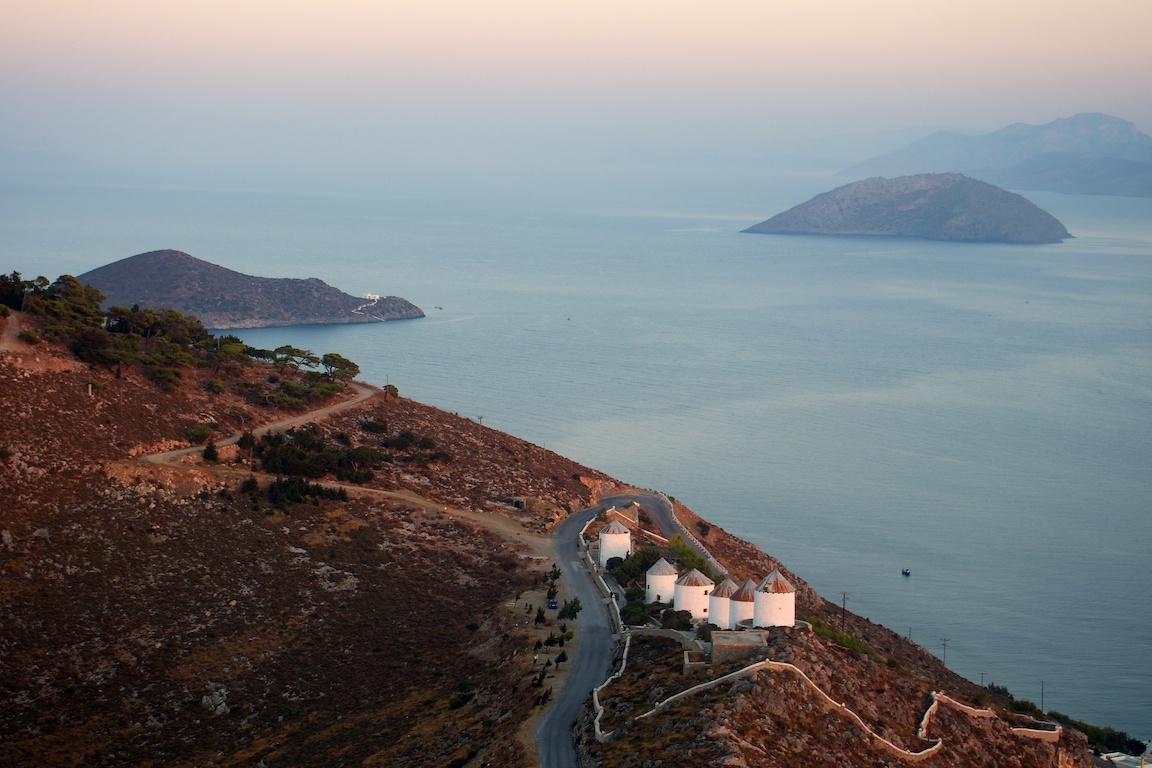 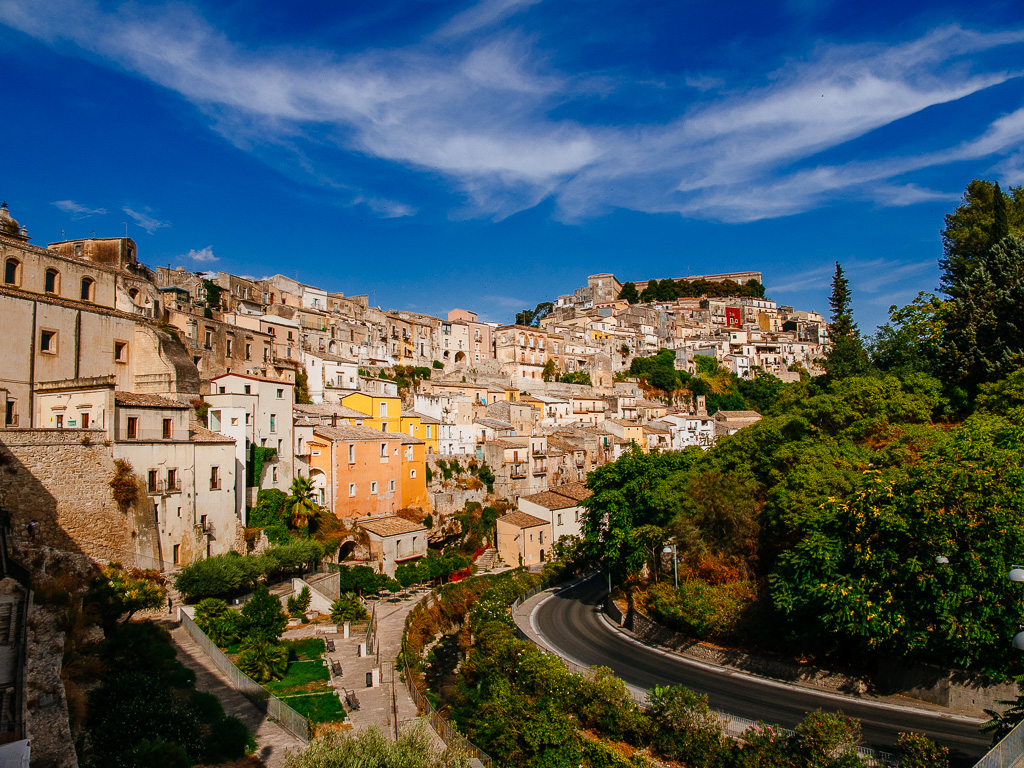 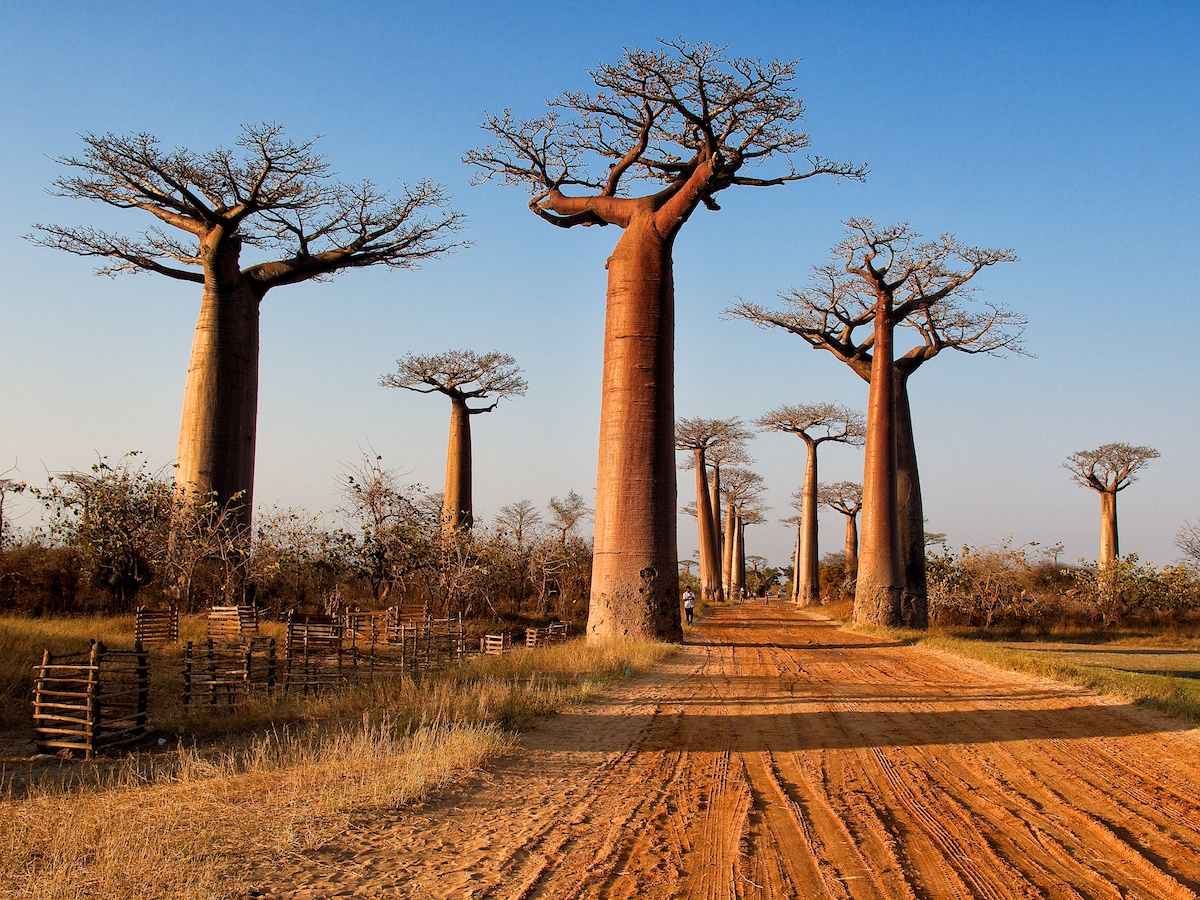 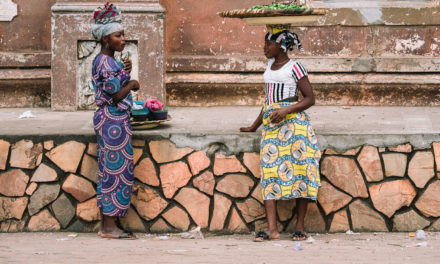