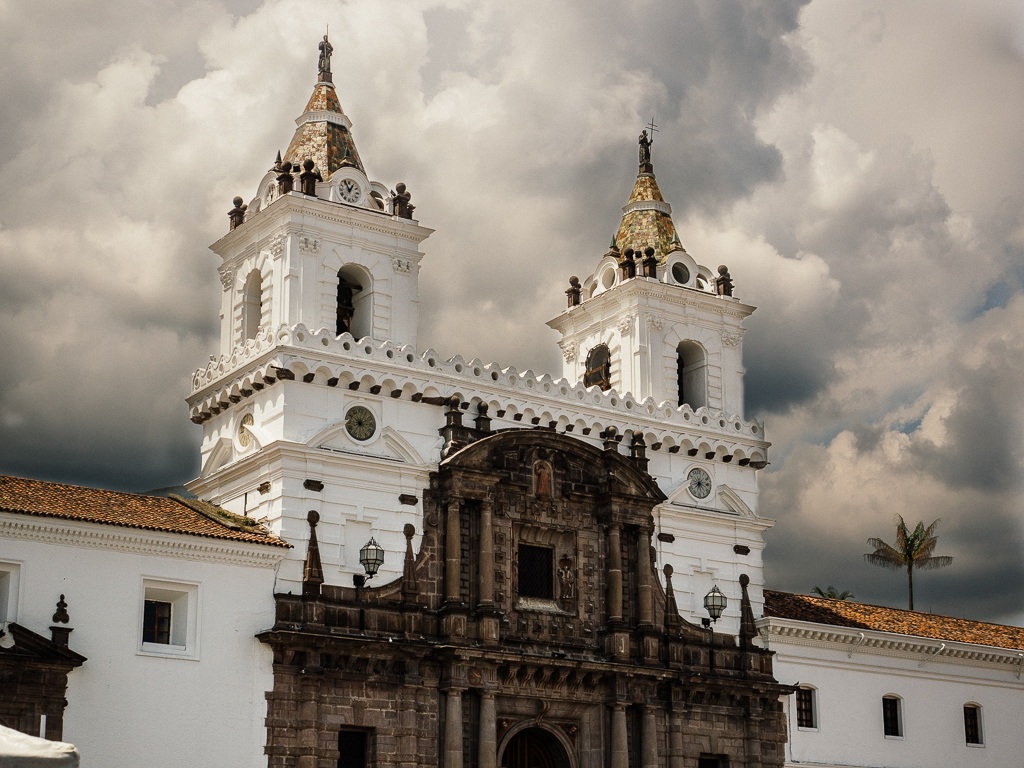 We arrived in Quito on Friday evening, after a long flight form Madrid. Mariscal Sucre, the new international airport is about one hour drive form the old town. We lodged in the beautiful Hotel Patio Andaluz, now declared a National Treasure, close to Plaza Grande.

The next morning, we drove to Otavalo, two hours north, to visit the the local markets. On the way we stopped by the sun clock right on the equatorial line. There isn’t much to see, but mysteriously, I got excited standing with my legs spreading across two hemispheres and my GPS reading at 0°0’0’’.

Brothers
Two brothers and their domesticated lama, near Otavelo in Ecuador.

Alpaca
An alpaca is a domesticated species of South American camelid., famous for the quality of its wool. It resembles a small llama in appearance.

Otavalo (pop. 90’000) is a largely indigenous town in the Imbabura Province, surrounded by the peaks of Imbabura, Cotacachi, and Mojanda volcanoes. On Saturdays, it hosts two markets: the animal market and the textile market.

Rooster
A rooster for sale in the animal market in Otavalo.

Woman at the Market
An elder lady at the animal market in Otavalo.

At the Market
A woman and her heavy load at the Otavalo animal market.

Animal Market
Pigs lying in the animal market in Otavalo.

Cockfights
A crowed gather to watch a series of cockfights in the animal market of Otavalo.

Mother and Daughter
A young mother with her daughter at the animal market in Otavalo.

Wrinkles
A woamn following her husband at the Otavalo animal market.

Guabas
A woman selling guabas in the Otavalo animal market. Guavas are giant pea pod like fruits with a great taste.

Chicken for Sale
A woam buying chicken at the Otavalo animal market.

At the Market
A young guy, at the animal market in Otavalo.

Otavalena
A lady in the animal market of Otavalo.

Roosters
A woman and her daughter returning home after buying a couple of roosters at the Otavalo animal market.

Lunch Break
A woman having lunch break in the Otavalo animal market.

Food Bench
A food bench in the Otavalo animal market.

Woman in the Market
A woman at the animal market of Otavalo.

Lunch Break
A woam at lunch break in the Otavalo animal market.

Cup of Coffee
Drinking cofee in a food tent in the Otavalo animal market.

Girl At the Market
A girl behind her bench at the animal market in Otavalo.

The Otavalo region is famous for its textiles and today the Otavaleños are among the most prosperous of indigenous groups in all of Latin America. They mastered weaving because they forced to work in sweatshops by the Spanish conquistadores.  In the early 20th century they began producing an inexpensive copy of cashmere that proved very popular. Then, the 1964 Law of Agrarian Reform granted workers title to their own land, which helped turn weaving into a cottage industry as Otavaleños began to weave in their own homes. Over 80% of the textile businesses in and around Otavalo are family owned, and their products are sold around the world.  (info source).

Lost
A local character in the Otavalo Saturday market. Despite the recent sucess in poverrty reduction, the poverty index in rural Ecuador is at 42% (2013), double the rate of the urban centers.

Reading
A woman in the Otavalo textile market reading her newspapaper.

Beggar
A woman beggin in the textile market, in Otavalo.

Making faces
A woman at the textile market, making faces at the gringo with the camera.

Elder i nOtavalo
An old man at the Saturday market in Otavalo.

Masks
Small masks for sale, at the Otavalo Saturday market.

Maze
Maze cooking in a food shop in the Otavalo market.

Fruits
A vendor of fruits at the Saturday market in Otavalo.

Black Hat
A local woman in the Saturday morning market in Otavalo.

Woman at the Market
A woman selling her stuff at the Saturday market in Otavalo.

Fruit Bench
A fruit bench at the Saturday market in Otavalo.

Happy
Two young ladies having fun at the Otavalo market.

Moather an Baby
A young mother and her baby in the Otavalo Saturday market in Ecuador.

Woman at the Market
An old lady walking the Saturday market in Otavalo.

Elder Couple
An old couple in the Saturday market in Otavalo .

Before returning back to Quito, we visited lagoon de Quicocha. The 3 km wide caldera and crater lake at the foot of Cotacachi Volcano was created by a massive eruption about 3100 years ago. Its name means Guinea Pig Laguna in Kichwa, given by the pig shape of the largest island in the middle of the laguna. These animals play a significant part in the everyday life of Ecuadorians, as they reproduce rapidly and need a minimum of food and care to survive. They make for a high protein meal especially for populations living in high altitude.

We visited Otavalo again one week later, this time together with Nana and Vassilis. We did not stay for long because it was the day of the Virgin of El Quinche. The annual festivities bring here thousands of people that walk overnight from Quito and the surrounding areas, so we had to drive back before the blocked the road.  Nevertheless, we had enough time to stop by Hacienda Cusin, a wonderful hotel near Otavalo with a paradise gardens and a great restaurant.

Hacienda Cusin
The beautiful lounge in Hancienda Cousin, near Otavalo.

Quito is the capital of Ecuador sitting on 2’850m between snowy peaks and active volcanoes. It is the highest capital city in the world – La Paz is not a capital city of Bolivia – and the first ever declared UNESCO World Heritage site. My first visit in 1992 left a mark for many years. My nightmares for almost a decade always with ended with a take off from the now decommissioned airport, in the city center, with plane not being able to clear the surrounding peaks.

The historic center is one of the most preserved and beautiful colonial cities in the Americas. Cathedral, monasteries, colorful old houses and narrow streets form a unique colonial cityscape. The locals still in a mix of modern European and traditional clothing with many people still wearing the hats and ponchos.

Women in Quito
Women outside the curch of San Francisco, in Quito's historic center.

After returning from Otavalo, we walked to La Ronda, the narrow street that is the heart of the nightlife in old Quito, especially on weekend nights. Yes, there are some tourists, but the street is mainly frequented by locals. For dinner, I had to queue for twenty minutes at a tiny shop for a slice of pizza and michelada , a interesting mix of beer, lime, salt and various salsas.

Old Quito
A narrow street near la Ronda, in the historic center of Quito.

We spent Sunday wandering the streets of the historic center. Walking the whole day at this altitude can be challenging without acclimatization, so we stopped frequently for refueling with coffee, food and beer.

Plaza Grande
PLaza Grande with the Catedral Metropolitana de Quito at the backdrop.

Man in Quito
An elder in Quito's historic center on a Sunday morning.

Woman in Quito
A woman in Grand Plaza, Quito.

Religious Gathering
A religious gathering outside the city cathedral in Quito.

Pushing the Cart
A man pushing a cart in old Quito.

Building in Quito
A crossroad in Quito's historic center.

Puppet
A little girl holding her puppet, at the San Francisco Plaza in Quito.

Street i nQuito
a street in the historic center of Quito.

Around noon, we took a taxi to the Telefériqo, the cable car that climbs the Pichincha volcano, all the way to 4’000m. The amazing panoramic views of Quito make the ride a must. Many locals ride the cable car with their bicycles and then descend all the way down to the city.

Quito
Quito viewed from teh top of the Teleferico at 4000m.

Quito South
The souther part of Quito viewed from teh top of the Teleferico.

Ready to Fly
Efie, ready to fly down the hill.

At the Top
Sitting at the top, over Quito.

At the Top
At the Teleferico peak, at an altitude of 4000m.

Modern Quito
The new town of Quito from the top of the teleferico peak.

After dusk, I had the chance to enjoy an hour of photographing the historic center under the moonlight. On Sunday nights, there isn’t much traffic Plaza Grande and Plaza San Francisco, which definitely adds to the ambiance.