Why the pale blue dot

As Wikipedia cites, The Pale Blue Dot is a photograph of Earth taken in 1990 by the Voyager 1  from a distance of about 6 billion kilometers. In the photograph, Earth is shown as a fraction of a pixel against the vastness of space. The Voyager 1 spacecraft, which had completed its primary mission and was leaving the Solar System, was commanded by NASA to turn its camera around and to take a photograph of Earth across a great expanse of space, at the request of Carl Sagan. Subsequently, the title of the photograph was used by Sagan as the main title of his 1994 book, Pale Blue Dot: A Vision of the Human Future in Space.

The ‘Pale Blue Dot’ refers to Earth and puts it to scale compared to the Universe. I think it is a brilliant term to define our planet, humanity and their importance on the cosmic scale. I find it also a very warm term to express the fact that this small dot is all we have. I have engaged in traveling to get to know as much as I can of this planet and its social diversity. I took photography to document my experiences, but more importantly to convey my perception of Earth and Humanity. I put this site together to add a narrative of the Pale Blue Dot. 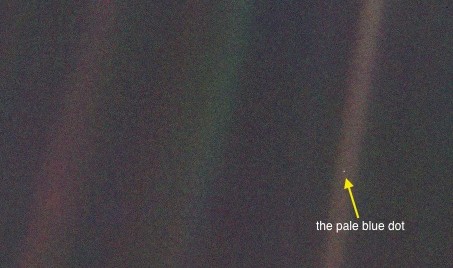 “Look again at that dot. That’s here. That’s home. That’s us. On it everyone you love, everyone you know, everyone you ever heard of, every human being who ever was, lived out their lives. The aggregate of our joy and suffering, thousands of confident religions, ideologies, and economic doctrines, every hunter and forager, every hero and coward, every creator and destroyer of civilization, every king and peasant, every young couple in love, every mother and father, hopeful child, inventor and explorer, every teacher of morals, every corrupt politician, every “superstar,” every “supreme leader,” every saint and sinner in the history of our species lived there–on a mote of dust suspended in a sunbeam.”*

“Ann Druyan suggests an experiment: Look back again at the pale blue dot of the preceding chapter. Take a good long look at it. Stare at the dot for any length of time and then try to convince yourself that God created the whole Universe for one of the 10 million or so species of life that inhabit that speck of dust. Now take it a step further: Imagine that everything was made just for a single shade of that species, or gender, or ethnic or religious subdivision. If this doesn’t strike you as unlikely, pick another dot. Imagine it to be inhabited by a different form of intelligent life. They, too, cherish the notion of a God who has created everything for their benefit. How seriously do you take their claim?”*